About Bone Machine
Well, gee, I don't know, maybe it's one of those riddles. It just has a certain feeling about it. We tried to do songs that would fit into the category of a Bone Machine. My mom heard the title and hated the title. She said it sounds so degrading. Sounds like something hellish or devilish. She also said, "There's nothing the devil hates more than a singing Christian." Sometimes it's better to give yourself questions instead of answers, particularly with music.

You know, you get here, even though on the compass it says north and south and east and west, you know that you're only really headed in one direction and that's from here to the grave and the only way it can be measured is with time. We're all going to the same place. Some of us are taking different routes and some of us are leaving earlier and arriving later but we 're all going to the same place. Seems like a legitimate topic to uncover once you get to a certain point. I don't mean it to be morbid. I'm not morbid. I think if you talk about it then it disarms it and makes it seem more easier to handle. Someday we're all going to be in a little box, it's gonna be real dark, and they put the lid on, put you down six feet and that's where we'll spend the rest of what there is of time.

There's so many thousands and thousands of things for songs to be about. It just seems like - phenomenal - that some of these songs talk about it.

Religion. I don't know what it is. You believe in things . When you're a kid you believe in the tooth fairy and Halloween and the Easter Bunny and Santa Claus and slowly you realize it doesn't exist. I shouldn't say that, cause if my kids read this they're gonna say, "Oh, Jesus, dad, what do you mean?
Santa Claus?"

I have to keep things alive for my kids so that they believe in them. It's a big question. You can't really cover it. Unless you want to get into a discussion about it. You're asking me how I feel about religion. I don't know. That's really the answer. Maybe there is a big guy sitting off somewhere in a cave with horns on his head and one big eye in the middle of his forehead and a fishing pole or a tennis racquet. Who knows?

We made a thing the other day that just killed me, all on our feet, okay, you do this, you go, "Vruum, Vruum, Vruuum", made this contra bassoon, bass clarinet, trombone, English horn, French horn, viola, cello - and I feel like a farmer at the opera with these guys. They play everything from John Cage to Mozart and everything in between. What happens to me is I feel like I have to find a common language. I don't read music. So you find a way to communicate. It's good.

If I find my own way to speak to them, everybody understands. I'm enriched by being with them. We were out there - everyone playing sticks on the asphalt for an hour like pygmies(1) - Clack, clack, clack, clack.

With music, it's strange, you're working with something that's invisible and has great power over you and people believe that every sound that you make never goes away. Sound waves never disappear. They just become more difficult to measure as they get further away.

My name is in all the music dictionaries you know. "Waits"(2) - those are the people who go through the city singing carols and singing the story of the day and putting out the lights. The town crier. All is well, it's 10:00 and all is well and Mrs O'Malley's cow has died and Charles Foster was hit by a train and Bill Bailey was run in with his own sword. The quintuplets are now three years old. That's what my name means in the music dictionaries.

(1) Everyone playing sticks on the asphalt for an hour like pygmies:
- Tom Waits (1992): "On 'The Earth Died Screaming,' we got sticks and we tried them everywhere. I wanted to try and get some of that sound of pygmy field recordings that I love so much, and we couldn't get it. We tried different places in the room, different microphones, nothing. Different kinds of sticks, sizes of sticks. And then we went outside and just put a microphone on the asphalt and there it was, boom, 'cause we were outside." (Source: "Composer, musician, performer, actor Tom Waits..." Pulse!: Derk Richardson. September, 1992)
- Tom Waits (1992): "I like the Earth Died Screaming. We have a pygmy percussion unit on there called the Boners that we formed during the making of it and we recorded outside. Took the microphone outside onto the dirt and put it up and had everybody play sticks on the sidewalk cause we couldn't get the same sound in the studio. It's too resonant." (Source: "KCRW-FM: Evening becomes Eclectic" KCRW-FM radio. Santa Monica. October 9, 1992)
- Tom Waits (1992): "That pygmy stuff that you sent me really flipped me! It really got me listening, because we struggled for a couple days with getting the sound of a stick orchestra inside the studio for "Earth Died Screaming". We tried every configuration and position of the microphone, and finally I said, "Well, why don't we go outside, isn't that where all these recordings are made?" And five minutes later we had a mike up, we were hitting it, it was there. It was that simple." JJ: Like out in the parking lot of the studio? TW: ...Right outside the door, yeah. JJ: What kind of sticks were you using? TW: Just 2 by 4's, anything we could find, logs from the firewood. About nine people. Just different people walking by. We'd say, "Come on, play some sticks!" But that pygmy music really sent me." (Source: "Tom Waits Meets Jim Jarmusch" Straight No Chaser magazine (UK) Vol. 1, Issue 20 Jim Jarmusch. October, 1992 (published early 1993))

(2) My name is in all the music dictionaries you know. "Waits":
- "From medieval times up to the beginning of the 19th century, every British town and city of any note had a band of Waits. Their duties varied from time to time and place to place, but included playing their instruments through the town at night, waking the townsfolk on dark winter mornings by playing under their windows, welcoming Royal visitors by playing at the town gates, and leading the Mayor's procession on civic occasions. Their instruments also varied, but were for the main part loud and penetrating wind instruments such as the shawm, which was so closely associated with them that it was also known as the Wait-pipe. Waits were provided with salaries, liveries and silver chains of office, bearing the town's arms. As a result of the Municipal Corporations Act of 1835, Waits were abolished, though their name lingered on as 'Christmas Waits', who could be any group of singers or musicians who formed a band in order to sing and play carols for money around their town or village at night over the Christmas period. Unfortunately, it is these largely amateur musicians who have become associated in peoples' minds with the name 'Waits', when they have heard of them at all, rather than the important civic officers and accomplished musicians who were true Waits." (Source and further reading: The Waits Website)
- Tom Waits (1985): 'I don't think it's that important to tell the truth,' he once said. Like the boy who cried wolf, he is disbelieved even when he's being honest. Waits, I'd said, was an unusual name. 'Well, he deadpanned, my name was Waitsosky and then we dropped the -osky." Oh really, said gullible me. TW: "No, Waits is a musical term. It's the guy that puts out the lights at the end of the day and sings all the stories of what's happened in the town.' Disbelievingly, I laughed. The dictionary put me right." (Source: "The Sultan Of Sleaze", YOU magazine, by Pete Silverton. Date: New York. Early October, 1985).
- Tom Waits (1988): 'The names (in Ireland), you know. It's like Callahan is from "calloused hands". Waits is really Scotch-Irish too - and Waits was the guy who came out in town at the end of the night and said "All is Well". And sang out the town news and put the street lights out. So they called him "a waits". He sang, like a town crier." (Source: "Title: A Flea In His Ear", City Limits magazine (UK), by Bill Holdship. Date: Traveler's Cafe/ Los Angeles. May 12-19 , 1988).
- Tom Waits (1999): ''My name defines a calling as well. The Waits traditionally turned out all the lights and put the town to sleep. I've spent a lot of time researching the meaning of names. ''Hmmm . . . ,'' he adds, as if intending to continue the thought. He doesn't. He was clearing his throat." (Source: "Talking With Tom Waits Is Like Trying To Converse With A Ghost In A Fog", The Toronto Star (Canada), by Greg Quill. Date: August 19, 1999).
- Margaret Moser (2002): What is Waits, English? TW: Scotch-Irish, I think. Waits is a musical term. A "waits" is the man who put out the lights at day's end and sang the song of the day. "It's 8 o'clock and all's well." Then he told the things that happened that day: Somebody's cow ran away, Mrs. Ferguson was found bound and gagged in the barn, it rained like hell ... whatever. That's what a waits was." (Source: "This Business Called Show'. Austin Chronicle (USA) Vol. 21, No. 26. May 10-16, 2002 by Margaret Moser) 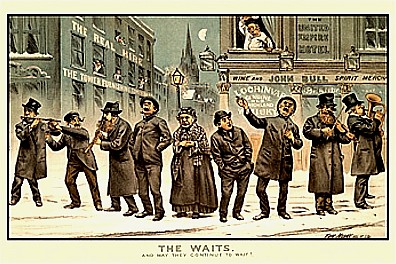