Nighthawks At The Diner

"Nighthawks at the diner of Emma's 49er
there's a rendezvous of strangers
around the coffee urn tonight...

Before Waitsian Rain Dogs, there were... Nighthawks. 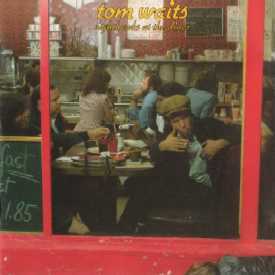 Night-hawk (Heb. tahmas) occurs only in the list of unclean birds (Lev. 11:16; Deut. 14:15). This was supposed to be the night-jar (Caprimulgus), allied to the swifts. The Hebrew word is derived from a root meaning "to scratch or tear the face," and may be best rendered, in accordance with the ancient versions, "an owl" (Strix flammea). The Revised Version renders "night-hawk". (Easton's 1897 Bible Dictionary) 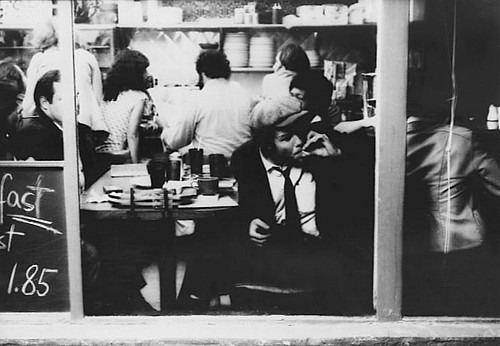 Though Waits himself never said so, the title and cover art of the album refers to the Edward Hopper's painting: "Nighthawks" (1942.Oil on canvas: 30 x 60 in. The Art Institute of Chicago.)
Click here for more info on Hopper.

Jay S. Jacobs (2000): "...Waits's manager, Herb Cohen, suggested that he do a live album. One that would showcase the compelling Waits stage persona... Waits himself had some reservations about embarking on the live album project, but he eventually agreed to do it. Bones Howe was enthusiastic from the outset, and he knew just how the job should be done. I said I didn't want to go into a club. I'd seen Tom live and we could make a much better record if ... we made a recording studio into a club. There was a room at the back of the Record Plant. It's a big recording studio, almost a soundstage. We put a little stage over in the corner. There was a booth with glass, so we didn't need to be in the room." Howe scheduled the Record Plant shows for the last two days of July 1975, and everyone got to work creating the appropriate ambiance. "We put tables in the room and we had a guest list," says Howe. "We had beer and wine and potato chips on the tables. And we sold out four shows ... two nights in a row. Tom got this stripper named Dwana to be the opening act." Dwana was an old-time burlesque queen whom Tom had met on one of his jaunts to the Hollywood underworld. She warmed up the crowd - which was largely made up of friends and acquaintances of Waits and crew - and everyone was primed for a drunken voyage into an Edmund Hopper painting or a Charles Bukowski poem. Waits didn't plan on disappointing them. Bones had put together a live band from the session musicians who had worked on The Heart of Saturday Night. Mike Melvoin served as bandleader and also covered keyboards. Pete Christlieb blew tenor sax, Jim Hughart hauled the upright bass, and Bill Goodwin played drums. Melvoin recalls the scene: "Candles on the tables ... A room full of people. The show started with a stripper, who was the classic old tassle-twirler. It was wonderful. The ambiance was great. The band was sensational. The interaction between the band and Tom was wonderful - between the band and Tom and the audience. It was great chemistry, and I have to hand it to Bones for putting that together."... Later on, says Howe, when the time came to mix the album, he and Tom "just went out and hid in a recording studio. We took the best of each of the four shows, put an album together out of it and then mixed it. We had a really, really good time doing it. The album shows that." The album's working title had been "Nighthawk Postcards from Easy Street," but they shortened it to Nighthawks at the Diner. Listening to the finished product, it's evident that the sessions it documents were a hoot for everyone involved, but, as often happens with live albums, fun in concert didn't quite translate onto vinyl." (1)

Dan Daley (2004): "...For Waits' and Howe's first collaboration, it seemed logical to move up to the larger track configurations that were quickly becoming popular, and Heart Of Saturday Night and Nighthawks At The Diner, the first two albums they made together, in 1974 and 1975 respectively, were done on the 3M 16-track deck at Wally Heider's Studio 3. Nighthawks was an especially interesting project. "We did it as a live recording, which was unusual for an artist so new," says Howe. "Herb Cohen and I both had a sense that we needed to bring out the jazz in Waits more clearly. Tom was a great performer on stage - Herb had him out there opening solo with an acoustic guitar for the Mothers Of Invention, so that was a baptism under fire for anyone, having to yell back at the hecklers and do your show. I told Tom that he should use a piano instead, and he says back [and Howe can almost perfectly mimic Waits' trademark growl and inflections], 'There's never one up there!' So we started talking about where we could do an album that would have a live feel to it. We thought about clubs, but the well-known ones like the Troubadour were toilets in those days. "Then I remembered that Barbra Streisand had made a record at the old Record Plant studios, when they were on 3rd Street near Cahuenga Boulevard. It's a mall now. There was a room there that she got an entire orchestra into. Back in those days they would just roll the consoles around to where they needed them. So Herb and I said let's see if we can put tables and chairs in there and get an audience in and record a show. "I got Michael Melvoin on piano, and he was one of the greatest jazz arrangers ever; I had Jim Hughart on [upright] bass, Bill Goodwin on drums and Pete Christlieb on sax. It was a totally jazz rhythm section. Herb gave out tickets to all his friends, we set up a bar, put potato chips on the tables and we had a sell-out, two nights, two shows a night, July 30 and 31, 1975. I remember that the opening act was a stripper. Her name was Dewana and her husband was a taxi driver. So for her the band played bump-and-grind music - and there's no jazz player who has never played a strip joint, so they knew exactly what to do. But it put the room in exactly the right mood. Then Waits came out and sang 'Emotional Weather Report'. Then he turned around to face the band and read the classified section of the paper while they played. It was like Allen Ginsberg with a really, really good band." Howe used a similar microphone setup as for previous sessions, although he had to make a few exchanges based on what Record Plant had available those nights. Electro-voice RE16s replaced the Shures he was used to, and Howe set up a Shure SM57 for Waits's vocal. "It was easy to use as a hand microphone," he says. "I also had a RE16 for him to use if he wanted." Howe ran the 3M 16-track deck at 15ips. "I knew the high end sounded better at 30ips, but I didn't like how it emasculated the overall sound and thinned out the low end. All the jazz records I recorded I did at 15ips. I actually went from 15ips on tape right up to the moment I started working in digital."(2)

Bones Howe's original layout diagram for the live recording that would become Nighthawks At The Diner.(2)

Michael Melvoin (1999): "...I knew that I was dealing with an extraordinary, different kind of talent. There were a couple of things about it. First of all, the lyrics ... I would describe them as top-rank American poetry. I thought then, and I still believe, that I was dealing with a world-class poet. My degree from school was in English literature, so I felt that I was in the presence of one of the great Beat poets. Tom's work was a counterpoint to that experience. I was amazed by the richness of it. The musical settings that he was using reminded me of certain roots jazz experiences that I thought were very, very appropriate for that."(3)

Jim Hughart (2000): “...For some reason Waits always recorded at the and of July, so for six years in a row or something like that, i celebrated my birthday in the studio with Waits, July 28. Preparing for Nighthawks In The Diner, Bones Howe was the producer on that, and he wanted the control of working in the studio, be he wanted the atmosphere of working live. So we went into the Record Plant, the old Record Plant that burned down a number of years ago. It had one big scoring stage in it, out of, I think, four studios in the building. It was a pretty good-sized room, and they set it up like a nightclub with big tables with checkerboard tablecloths and peanuts and pretzels and wine and beer, and it was an invitation-only audience. We did four shows each night, and we changed the audience after each show. It was done like a nightclub thing. And incidentally, Waits had this bright idea. There was a girl he knew who was a stripper, so he said, "I think I'll bring her in." What could be more appropriate for the warm-up for a Waits show than a stripper? It was perfect. Preparing for this thing, we had to memorize all this stuff, 'cause Waits had nothing on paper. So ultimately, we spent four or five days in a rehearsal studio going over this stuff. And that was durdgery. But when we did actually get it all prepared and go and record, that was the fastest two days of recording I've ever spent in my life. It was so fun. Some of the tunes were not what you'd call jazz tunes, but for the most part that was like a jazz record. This was a jazz band. Bill Goodwin was a drummer who was associated with Phil Woods for years. Pete Christlieb is one of the best jazz tenor players who ever lived. And my old friend, Mike Melvoin, played piano. There's a good reason why it was accepted as a jazz record.”(4)

Barney Hoskyns (2009) on the Nighthawks At The Diner studio musicians: “...To this day, the Nighthawks musicians find themselves regularly being grilled about those two famous nights at the Record Plant. When people learn of their association with Tom Waits, the fact that they've played with innumerable jazz greats over the years apparently counts for nothing. "People like Melvoin and Christlieb have traveled the world and played with everybody," laughs Bones Howe. "Yet the one thing people always ask them is, 'What was it like making Nighthawks at the Diner?"'(5)

By the way, a Nighthawk is actually a bird. But it probably isn't what you expected it to be...
It's the size of a Robin...

Common nighthawk (Chordeiles minor):
"...The common nighthawk is easily recognizable as it flies high over city streets and rooftops, or country areas on summer evenings. A hollow booming sound is produced by the wings as the bird pulls out of a steep dive while in pursuit of flying insects. Nighthawks catch mosquitoes, flying ants, and other insects on the wing. Their enormous mouths, with surrounding bristles, are ideally suited for aerial capture. Nighthawks build no nests. Instead, they lay their eggs on the ground, or, in cities, on flat gravel rooftops".