People who live outdoors. You know how after the rain you see all these dogs that seem lost, wandering around. The rain washes away all their scent, all their direction. So all the people on the album are knit together, by some corporeal way of sharing pain and discomfort. 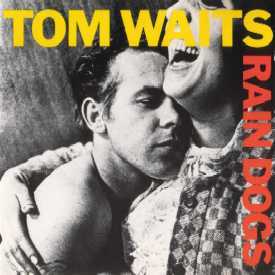 No, that isn't Tom Waits.

They are two regulars of Caf� Lehmitz (near the Hamburg red-light boulevard Reeperbahn). They're called Lily (woman) and Rose (man). The caf� no longer exists. It's said that it has been turned into a church. The picture is by Swedish photographer Anders Petersen(5). Petersen found the Cafe Lehmitz in the late 1960s, and spent most of his days and nights there for over three years, photographing its clients: sailors and stokers from around the world, along with dockers, cabdrivers, prostitutes, striptease dancers and pimps and many others who revelled in the underside of German society. With his impressive work of intimate yet disturbing portraits, Anders Petersen became one of the central figures of European photography.

The above picture is from Petersen's first book "Cafe Lehmitz", published in Germany (by Schirmer & Mosel) in 1978 and in France (by Contrejour) the following year. The book has been re-published by Schirmer & Mosel in 2004. The picture is also included in Petersen�s "Photographs 1966-1996" (Journal F�rlag, Sweden. September, 1997), the first retrospective to cover his work as a whole.

Caf� Lehmitz, Hamburg 1967-1970(2)
by Anders Petersen
Notice Rose in the middle and Lily standing on the right

Anders Petersen: "...The people at the Caf� Lehmitz had a presence and a sincerity that I myself lacked. It was okay to be desperate, to be tender, to sit all alone or share the company of others. There was a great warmth and tolerance in this destitute setting."

Anders Petersen: "...My first exhibition was staged at the Lehmitz. Three hundred and fifty pictures. Kurt the barman and me had agreed that if people recognized themselves in the pictures, they could keep them."

Waits might have seen a photobook or an exhibition by Anders Petersen, when looking for an appropriate cover for the album Rain Dogs in 1985. The picture doesn't seem to represent the Rain Dogs album as a whole, but it might very well have been the inspiration for the song Rain Dogs itself. It sure is fascinating to see that Waits went to Hamburg in 1990, to work on the play The Black Rider with Robert Wilson and William Burroughs. Only to return in 1992 for the play Alice. It might be Waits actually felt attracted to Hamburg city and its remarkable nightlife (mentioning places like Harry's Harbor Bizarre and Reeperbahn in his songs).

Over the years, the song Rain Dogs, became the Tom Waits fan's anthem. And Tom Waits fans started refering to themselves as "Raindogs", probably because of the line:"For I am a rain dog too."
But, what is a Rain Dog?

Tom Waits (1985): "...People who live outdoors. You know how after the rain you see all these dogs that seem lost, wandering around. The rain washes away all their scent, all their direction. So all the people on the album are knit together, by some corporeal way of sharing pain and discomfort." (Source: "The Sultan Of Sleaze" YOU magazine, by Pete Silverton. Date: New York. Early October, 1985)

Tom Waits (1985): "...It's a kind of word I made up for people who sleep in doorways. I mean, New York when it rains, all the peelings and cigarette butts, float to the surface like in Taxi Driver when he says, "someday a real raid's gonna come along and wash all the scum off the street". Looks better in the rain, like it's been lacquered." (Source: "Lower east side story". The Face: Elissa van Poznak. Ca. October, 1985)

Tom Waits (1985). "...Maybe I should say something about the title of the album, "Rain Dogs". You know dogs in the rain lose their way back home. They even seem to look up at you and ask if you can help them get back home. 'Cause after it rains every place they peed on has been washed out. It's like "Mission Impossible". They go to sleep thinking the world is one way and they wake up and somebody moved the furniture." (Source: "Tom Waits for no man". Spin Magazine: Glenn O'Brien. November, 1985)

Tom Waits (1985): "...A Rain Dog is - you notice it more in lower Manhattan than anywhere else - after a rain in New York all the dogs that got caught in the rain, somehow the water washed away their whole trail and they can't get back home so about 4 in the morning you see all these stranded dogs on the street and they're looking around like - won't you help me get back home, sir, please - excuse me sir - excuse me sir - can you help me find my way back home - all makes and models, the short ones, the black ones, the tall ones, the expensive ones, the long ones, the disturbed ones, they all want to get home. So that's a Rain Dog. It's like falling asleep somewhere and you thought you knew where you were and when you woke up - it's like Mission Impossible - they changed the furniture and the walls and windows and the sky turned a different colour and you can never get back and most of the stories in this record have to do with people in New York who are experiencing a considerable amount of pain and discomfort." (Source: "Rain Dogs Island Promo Tape" (taped comments on songs as sent to radio stations). Date: late 1985)

Tom Waits (1985): "...You see all these dogs out on the street looking lost. They kind of look up at you like: `'scuse me sir, can you, uh, ... (deep voice) can you help me? 'cause the rain has washed away all the scents; the way they got wherever they got. So they can't find their way back home." (Source: "Enigmatic Waits survives, thrives" The San Diego Union-Tribune. By Rip Rense. November 1, 1985)

Until 1999 Rain Dogs had been Waits's best selling album ever (only to be bypassed by Mule Variations in 1999). Polls among Tom Waits fans show it's still one of his most popular albums. Over the years the album reached cult status, making its title and cover a universal symbol of "acquired yet refined taste."There are several (Tom Waits cover-) bands calling themselves Rain Dogs(6).

(4) Eternal Sunshine of the Spotless Mind (2004). Directed by Michel Gondry. Writing credits (WGA). Part of dialogue from "Eternal Sunshine of the Spotless Mind": "CLEMENTINE: Well, I'm there. I've seen you, man. I hide in the back as much as is humanly possible. You have a cell phone? I need to quit right this minute. I'll call in dead. I'll go on the dole like my daddy before me. Might be the hair. JOEL: What might? CLEMENTINE: Changes a lot. That's why you might not recognize me. What color am I today? (pulls a strand in front of her eyes, studies it) Blue, right? It's called Blue Ruin. The color. Snappy name, huh? JOEL: I like it. CLEMENTINE: Blue ruin is cheap gin, in case you're wondering. JOEL: Yeah. Tom Waits says it in -- CLEMENTINE: Exactly! Tom Waits. Which song? JOEL: I can't remember. CLEMENTINE: Anyway, this company makes a whole line of colors with equally snappy names. Red Menace, Yellow Fever, Green Revolution. That'd be a job, coming up with those names. How do you get a job like that? That's what I'll do. Fuck the dole. JOEL: I don't really know how -- CLEMENTINE: Purple Haze, Pink Eraser. JOEL: You think that could possibly be a fulltime job? How many hair colors could there be? Fifty, tops? CLEMENTINE: (pissy) Somebody's got that job. (excited) Agent Orange! I came up with that one.Anyway, there are endless color possibilities and I'd be great at it. JOEL: (mumbly) I'm sure you would. CLEMENTINE: My writing career! Your hair written by Clementine Kruczynski. (thought) The Tom Waits album is Rain Dogs. JOEL: You sure? I don't know that album -- CLEMENTINE: I think. Anyway, I've tried all their colors. More than once. I'm getting too old for this. But it keeps me from having to develop an actual personality. I apply my personality in a paste. You?" (Source: http://www.beingcharliekaufman.com/ October, 2005).