"We at Levi Strauss & Co. have long admired Mr. Waits' work and respect his artistic integrity including his heartfelt views on the use of his music in commercials."

In October - December 1990 Screamin' Jay Hawkins recorded a cover of "Heartattack And Vine" to be released on the album Black Music For White People. At that moment Tom Waits did not hold the copyright to the song. The copyright was owned by Herb Cohen's publishing company Third Story Music, Inc. (later Fifth Floor Music Inc.) The CD was released in 1991 on Cohen's Bizarre/Straight Records/ Planet Records (BP 40102 2). The album was produced by Robert Duffey (Herb Cohen was credited as executive producer).

It's unknown whether Tom Waits was opposed to this cover being released, but one might assume he had no objections to Hawkins covering one of his older songs. The two might even have met on the set of Mystery Train (Jim Jarmusch, 1989). And Waits might have been aware of the fact that he had only little legal reasons to stop this cover from being released (no copyright infringement, no false endorsement, no voice misappropriation).
But Herb Cohen wanted more... 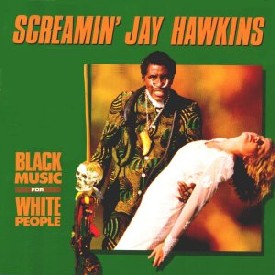 Herb Cohen, eager to cash in his copyrights for Waits's early songs, made a deal with the European branch of jeans producer Levi Strauss & Co. From January to June 1993 Hawkins' "Heart Attack and Vine" was used in a TV-commercial (called "Procession") broadcast in 17 countries throughout Europe and later released as Levi's CD singles in: Holland, UK, Germany and Austria.

According to Mike Keneally (who played with Hawkins), the cover was also included in a Levi's compilation.(1) The compilation Keneally is referring to is unidentified. It could be one of the following Levi's releases:

By then it was a well know fact that Tom Waits did not do commercials. Since November 1988 Waits was engaged in the lawsuit against Frito-Lay and Tracy-Locke ("Part of my character and personality and image that I have cultivated is that I do not endorse products.")(3) There was no doubt about Waits's stand on doing commercials. So Waits went to court once more (May, 1993).

One wonders what case Waits tried to make against Levi's. He could not sue for copyright infringement (Waits did not hold the copyright), nor for voice misappropriation (Hawkins did not do an impersonation). He probably sued for something like "false endorsement" (embarrassment, damage to artistic reputation or professional standing, future publicity value). Waits would probably have to go to a European court. But in this area jurisdiction in Europe hasn't pushed the law as far as in the US. Financial compensations in Europe were and are just a fraction of those in the US.

Jay S. Jacobs (2000):(4) "Waits sued and Cohen countersued. While the court ruled in favor of Waits, he was awarded only a fraction of the financial compensation he'd requested. However, he could take solace in the official apology he received from Levi Strauss and Company, which took the form of a fullpage ad in Billboard magazine."

Waits might have accepted Levi's apology, as he became aware of the minimal awards European laws account for. And he probably was still involved in the Frito-Lay case (the exact date of the Levi's case is unknown), which was far more demanding and rewarding.

An Apology To Tom Waits:
"Tom Waits is opposed to his music, voice, name or picture being used in commercials. We at Levi Strauss & Co. have long admired Mr. Waits' work and respect his artistic integrity including his heartfelt views on the use of his music in commercials. From January to June 1993 Levi Strauss Europe authorized broadcasting in 17 countries a commercial for Levi's 501 jeans called "Procession". This commercial featured Tom Waits' song "Heart Attack and Vine" performed by Screamin' Jay Hawkins. We obtained the rights in good faith and were unaware of Mr. Waits' objections to such usage of his composition. We meant no offense to Mr. Waits and regret that "Heart Attack and Vine" was used against his wishes and that the commercial caused him embarrassment." (Levi's apology as printed in Billboard magazine, 1993)

It's a pity there are no accounts of Tom Waits and Screamin' Jay Hawkins actually meeting, but there have been a few occasions where they most likely ran into each other. They both contributed to Jim Jarmusch's Mystery Train from 1989 (Hawkins in a cameo as a hotel night clerk, Waits as the voice of a radio DJ). They both contributed to the soundtrack for the Wayne Wang movie Smoke from 1995 (Hawkins with "Hong Kong", Waits with "Downtown Train" and "Innocent When You Dream"). In 1994 Hawkins recorded yet another cover of a Waits song ("Whistlin' Past The Graveyard") for his album Somethin' Funny Going On (Bizarre/ Planet). Waits not taking legal action might suggest he did not oppose to this cover being released. In 1998 both Hawkins and Waits played at the "'Not in Our Name: Dead Men Walking'' benefit at the Shrine Auditorium in Los Angeles.(5)

It's hard to determine whether the two (both being unique, colourful and wayward characters) were in fact kindred spirits. Somehow one wishes they were. Screamin' Jay Hawkins died February 12, 2000 in Neuilly-sur-Seine (France) near Paris at the age of 70. According to the Associated Press he underwent surgery earlier in the week to treat an aneurysm at the Ambroise Pave clinic and subsequently suffered multiple organ failure.(5)

(1) Mike Keneally:"... when I was in Europe a couple of weeks ago I saw that the song is included in a compilation of songs from Levi's ads over the years." Source: The Mike Keneally Website. Contents �1994 - 2002 Obvious Moose