"He comes in for coffee sometimes. Reads some poetry. They told me he was a musician. Tom Wait. Never heard of Tom Wait.' Little Amsterdam's elderly owner shrugs. So someone gave me his record. He sounds just like Clemens VandeVen. He points out a photograph of VandeVen behind the bar. 'That's him. And that,' he points helpfully at the picture next to it, 'is Tom Wait."

In 2004, prior to the release of Real Gone, Waits did some interviews in Little Amsterdam Restaurant (12830 Valley Ford Road) near Petaluma CA. Waits seemed to be fond of the place. He and Mark Howard had even had plans to record Real Gone over there(1). Apparently Dutch owner Evert Winkelman didn't want the place to be occupied for over a month, so the album was recorded in Los Angeles in stead. Several interviewers already noticed the "Waitsian" quality of the place 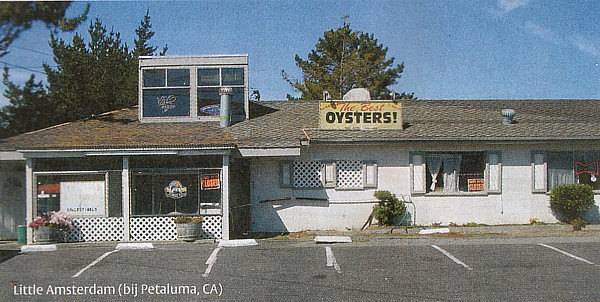 Sylvie Simmons (2004): "He comes in for coffee sometimes. Reads some poetry. They told me he was a musician. Tom Wait. Never heard of Tom Wait.' Little Amsterdam's elderly owner shrugs. So someone gave me his record. He sounds just like Clemens VandeVen. He points out a photograph of VandeVen behind the bar. 'That's him. And that,' he points helpfully at the picture next to it, 'is Tom Wait.' You can see why Waits likes it here. An oyster bar so near the middle of nowhere it smacks of perversity (45 minutes outside sleepy Petaluma, California, former egg capital of America and the place they filmed American Graffiti), boasting a windmill, bullfighting trophies and pool tables, and run by an old Dutch seaman who takes it for granted Waits copped his licks from a guy in South Holland but still likes him well enough."(2) 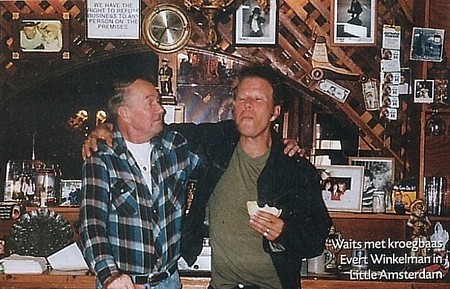 Richard Cromelin (2004): "The Little Amsterdam sits incongruously in the rolling expanse of Sonoma County farmland, a low white building adorned with a Dutch windmill - a "fake" windmill, Tom Waits' assistant has specified in her directions. The restaurant's interior looks like something Waits himself might have had a hand in decorating. Besides the clutter of farm implements and copper cookware and sombreros, antique radios sit gathering dust, and an old-fashioned curved bicycle horn hangs in one corner. A large fish patrols the waters of a murky aquarium near the table where Waits sits drinking coffee from a plastic cup. "Did you see the albino catfish?" he asks. "He apparently ate all the fish in the tank, and that's why he's so big."(3)

Richard Grant (2004): "I find him in an impeccably Waitsian establishment not far from his home in the rolling hills of northern California. The Little Amsterdam is a ramshackle roadside bar and restaurant with a miniature windmill out front, a trailerpark out back and an old piano under a tarpaulin by the side entrance. The owner is a retired Dutch sailor with a deep passion for Mexican bullfighting, and inside the walls are covered with bullfighting posters, sweat-stained sombreros and bulls' ears attached with spiked daggers. And there in a black vinyl booth, next to an albino catfish in a tank"(4) 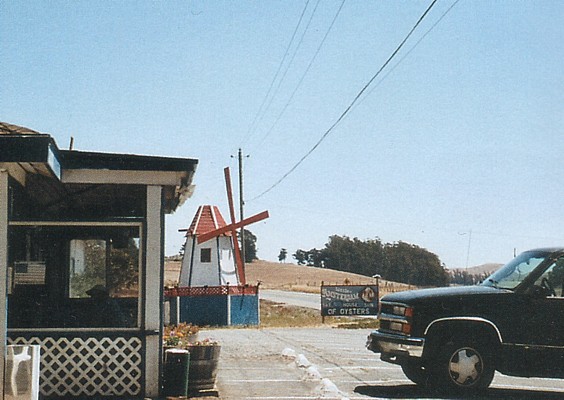 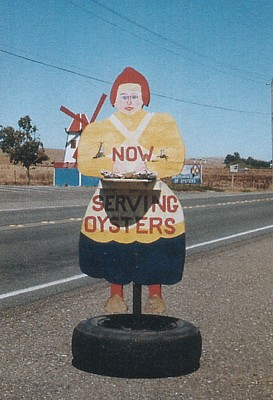 In 2006 Waits had a video recorded (directed by Danny Clinch) for "Lie To Me" in the backyard of Little Amsterdam. 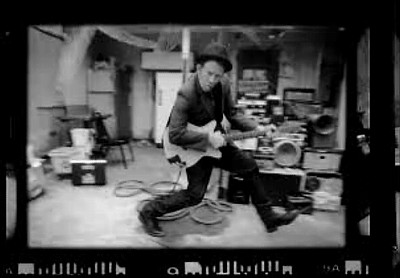 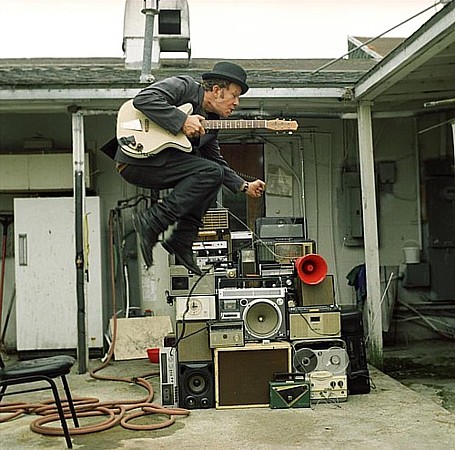 Around the same time Waits did some interviews at Little Amsterdam again, promoting the release of Orphans. He also did several photo sessions there with: Michael O'Brien, Robert Yager and Danny Clinch. 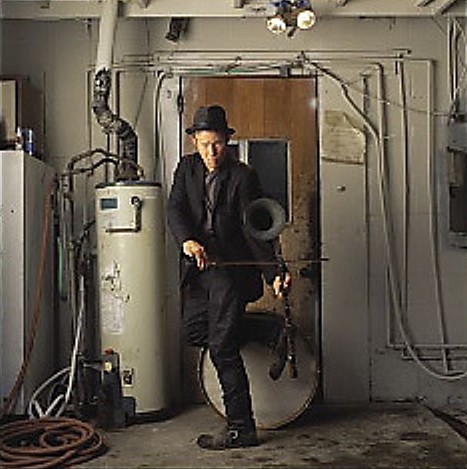 Sean O'Hagan (2006): "We are sitting out the back of the Little Amsterdam oyster bar, half an hour's drive north of Petaluma, where they filmed Peggy Sue Got Married. It's the only diner with a windmill out front. Tom's kind of place: a slightly run-down Dutch diner where Mariachi bands used to play at weekends until the owner's entertainment licence was revoked after he got busted for having an illegal trailer park out the back. Tom's signed the petition like everybody else who passes through. Outside, as far as the eye can see, there are gently rolling sun-burnished hills, tall trees, grazing cattle. It could be Tuscany except for the sign that says 'Open for Hamburgers'. This is Tom's home turf." (5) 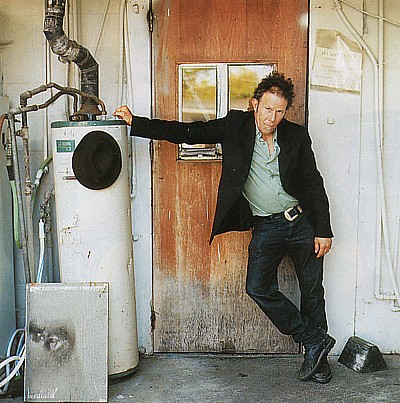 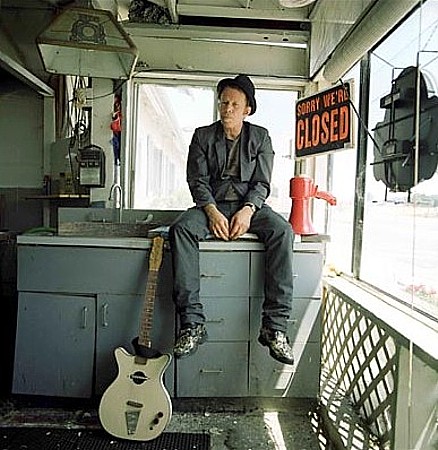 Sean O'Hagan (2006): "'Just look at this piano,' he says, the voice low and hoarse, and just the way you'd imagine it to be from his singing. 'Why has this piano been left out in the rain? It will never have a song pass through its chambers again. That's a sad thing, right?' I look at the piano, discarded and battered beyond repair by the elements, and I nod. It is a sad thing. Sad enough to end up in a Tom Waits song. This is exactly the kind of place where the famously wayward piano in 'The Piano has been Drinking (Not Me)' might have ended up. Coincidentally, we've just been talking about drinking, and about losing your way in the fog that can sometimes settle on a life when a person loses track of where he is, who he is, and where the hell he was going."(5) 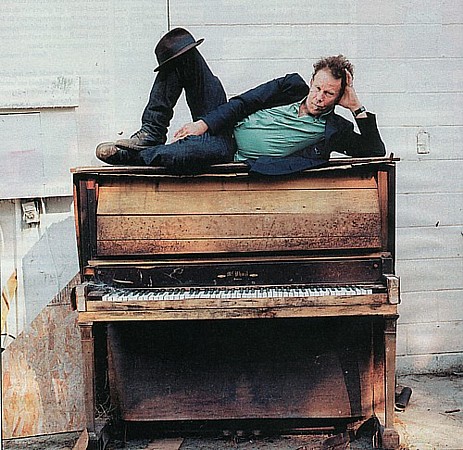 By late 2006, Little Amsterdam had become a well known location for the Tom Waits community. According to owner Evert Winkelman, by then the place was already regularly visited by Waits fans hoping to catch a glimpse of the man. So when the artwork for Orphans was revealed in November 2006, most fans recognised the front cover. It was shot in the backyard of Little Amsterdam.

It was a rainful, rough winter this winter for the Chicken Farmer up here in Sonoma County, and the silver lining was Little Amsterdam, the funky famous windmill oyster burger joint where I ate some hours and other things, including, most recently, a fish and chips special ($7.95). If you've ever driven from Petaluma out to Bodega Bay and/or back, you know what I'm talking about. Right? Beautiful, bucolic drive. Cows and sheep. Hills and hills. Then, this little low white building with the fake windmill, a screened in barbecue area, and inside it's nicer than you'd think, with wood rafters and a shiny bar and two pool tables. They have a big catfish in a tank on the first and biggest dining room table. And, on the wall opposite: a sort of shrine to Tom Waits, including newspaper clippings and signed photos of Him with the Little Amsterdam people. On weekends they barbecue oysters and put out hand-painted signs along the road saying "the original" and "the best" and so on. Well, you know they're my new favorite barbecued oysters, especially because they pour enough sauce into them that you can dip in too with your fried fishes and fresh-cut French fries and anything else that happens to be lying around. Technically, the fish and chips special was supposed to come with two fried oysters, but I talked them into substituting barbecued ones — which was the least they could do after not letting me sit with the catfish. The big table is reserved for parties of four, and it says so clearly, but I'd hoped that because there was nary another farmer eating there, they would throw math out the window. Give the Chicken Farmer someone to talk to. Nope. Outside, across the road, across the ditch and tall weeds, an invisible rooster moved among the cows, crowing. And that was who I ate with. I still want to talk to that catfish, though — so if any three people anywhere ever want to come up and eat with me, next time . . . Waitressperson told me the fish would just spit at you anyhow, the old crank. (I mean the fish.) Used to suck in marbles from the bottom of the tank, she said, and shoot them at the glass, and they had to take all the marbles out for fear it would crack up its world. I love that, though. Smart enough to blast marbles off the walls by way of busting out, and dumb enough not to imagine that doing so would be the end of it. 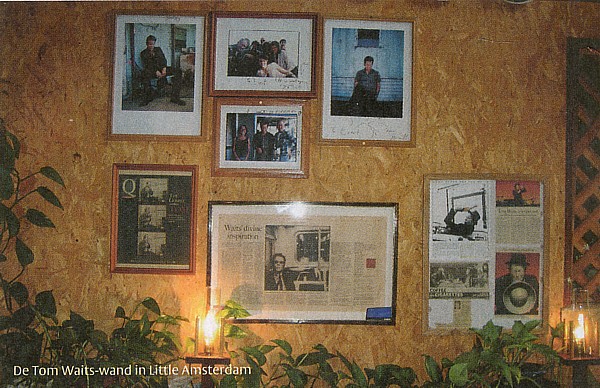 In 2002 the County of Sonoma had taken legal actions against Winkelman for: 1) the presence of an illegal trailer park, 2) an illegal addition to a restaurant and 3) the presence of a dangerous building (County of Sonoma, resolution March 26, 2002). In 2007 the county had agreed upon a reduction of penalties and interest (County of Sonoma v. Winkelman, SCV-236451.November 7, 2007). It seems that around the same time Little Amsterdam was closed. Since that time it has been up for sale through Bradley Real Estate. 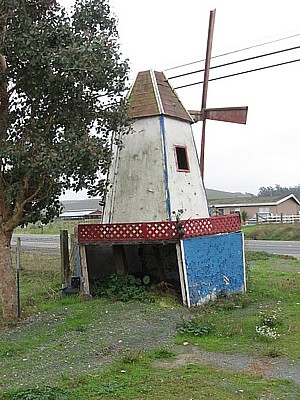 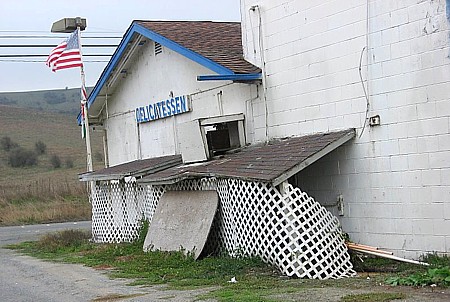 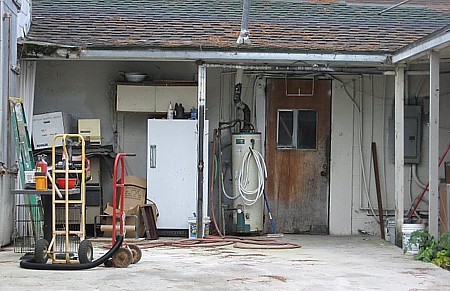