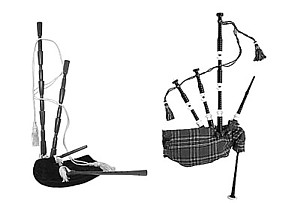 The bagpipe is a reed instrument with an air reservoir in an animal skin bag. They are common across Europe and Arabic countries.

TW (1983): "Yeah, Anthony Clark-Stewart played the bagpipes, looked like he was strangling a goose, had to record him separately." (Source: "Tom Waits For No Man". Melody Maker, by Brian Case. Date: October 29, 1983)

TW (1983): "It's hard to play with a bagpipe player. I had an opportunity to play with my first bagpipe player on this record. You can't play with them. It's like an exotic bird. I love the sound, it's like strangling a goose." (Source: "The Beat Goes On". Rock Bill magazine (USA). October 1983, by Kid Millions)

TW (1999): "Bagpipe players. With all due respect, forget about it. It's hard for them to play with anyone other than another bagpipe player. And even that is a challenge because they have their own scales. And they're so loud. I ended up telling them to play far, far away" (Source: "Wider public greets Waits' Variations" USA Today: Edna Gundersen. June, 1999) 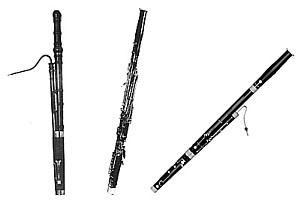 The bassoon is the bass member of the woodwind family. Like the oboe it has a double reed and overblows an octave higher. The bassoon is considered to have a register tone similar to that of the human voice, particularly in the central and upper register. The instrument has a significant length (slightly over 8 feet), made playable by doubling the tube back on itself. A metal keying system is vital to allow the player to operate the widely spaced holes, which control pitch. A large relative, the contrabassoon (or double bassoon), plays an octave lower.

TW (1992): "We made a thing the other day that just killed me, all on our feet, okay, you do this, you go, "Vruum, Vruum, Vruuum", made this contra bassoon, bass clarinet, trombone, English horn, French horn, viola, cello - and I feel like a farmer at the opera with these guys. They play everything from John Cage to Mozart and everything in between." (Source: "Telerama Interview" (French promo CD). Date: September 9, 1992)

TW (1994): "Your hands are like dogs, going to the same places they've been. You have to be careful when playing is no longer in the mind but in the fingers, going to happy places. You have to break them of their habits or you don't explore, you only play what is confident and pleasing. I'm learning to break those habits by playing instruments I know absolutely nothing about, like a bassoon or a waterphone." (Source: "The music of chance" Spin Magazine: Mark Richard. June, 1994) 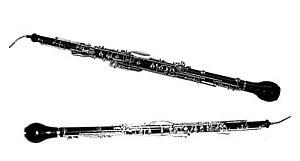 Cor anglais (English horn) is a wood-wind double-reed instrument of the oboe family, of which it is the tenor. It is not a horn, but bears the same relation to the oboe as the basset horn does to the clarinet. The cor anglais differs slightly in construction from the oboe; the conical bore of the wooden tube is wider and slightly longer, and there is a larger globular bell and a bent metal crook to which the double reed mouthpiece is attached. The fingering and method of producing the sound are so sithilar in both instruments that the player of the one can in a short time master the other, but as the cor anglais is pitched a fifth lower, the music must be transposed for it into a key a fifth higher than the real sounds produced. The compass of the cor anglais extends over two octaves and a fifth. 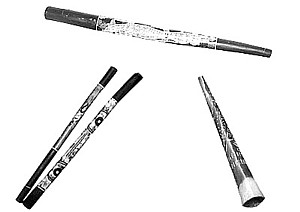 A didgeridoo, a woodwind aerophone, is traditionally made out of eucalyptus or bamboo. Australian Aborigines used the didgeridoo to communicate over long distances, as well as to accompany songs, and the instrument is commonly considered the national instrument of Australian Aborigines. Famous players include Mark Atkins and Joe Geia, as well as white virtuoso Charlie McMahon. The name "didgeridoo" is generally used by non-Aborigines. In Australia, this instrument is indicated with at least fifty different names. Although made of wood, the didgeridoo is played by vibrating the lips like a brass instrument. The style in which it is played uses circular breathing to produce a continuous tone, and relies on rhythm rather than precise musical pitch for its interest. Any given didgeridoo, like an organ pipe, will have just one natural pitch; and can vary only very slightly from that pitch. As such the didgeridoo functions more like an unpitched percussion instrument than a melody instrument. 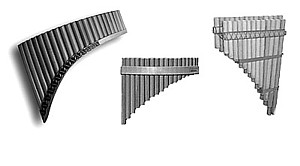 Pan pipes is an ancient musical instrument based on the principle of the stopped pipe, consisting usually of ten or more pipes of gradually increasing length. The syrinx has long been popular as a folk instrument, and is considered the ancestor of both the pipe organ and the harmonica, or mouth organ. The pipes composing it are stopped at one end, so that the sound waves have to travel twice the length of the pipe, giving out a note nearly an octave lower than that produced by an open pipe of equal length. The breath is blown horizontally across the open end against the sharp inner edge of the pipes, creating the regular series of pulses which generate the sound waves within the tubes. Each pipe gives out one note, but by overblowing, that is, increased pressure of breath and tension of lips, harmonics are produced.

JJ (1992): "What's that instrument in your studio that looks like a vacuum cleaner with horns attached to it? TW: Airhorn from a train. JJ: It's one chord? TW: One chord, yeah. I pick up junk when I find it. I wanna get a thing that I can do a stick sound with like eight sticks mounted on a frame, almost like a pitchfork, only the forks would be wood, and on a spring base, so that when you hit it against the ground you get a flam, a stick flam of eight characters. You get the clack, clack, clack, but you'd be able to do it with just one stick, hitting the stick and hitting the sound of eight sticks. I dunno..." (Source: "Tom Waits Meets Jim Jarmusch" Straight No Chaser magazine (UK) Vol. 1, Issue 20 Jim Jarmusch. October, 1992 (published early 1993))