Biography » Interviews » On the road

When Tom Waits joined Ramblin' Jack Elliot for a recording session in Cotati this summer, he couldn't help smiling as Elliot got up, walked across the floor of the studio and went on one of his gandy-dancing monologues, moving in and out of words with a jostling, sallied ease.

"There was a photograph of a ship hanging on the wall in the studio and he talked about 40 minutes, in detail, about the history of the ship, its owners, the battles it had been in, all that," Waits says. "It was astonishing, really.

"The thing with Jack, the ramblin' in his name comes as much from the fact that when he starts a story you don't know where it's going to end as it does from him traveling around the country, playing his music."

"I was happy to be there when he told those stories," says Waits. "I guess I have a romantic notion of people like that. The way they live. The way they walk and talk. I enjoy his company."

Waits will be on Elliot's next album(1), along with Arlo Guthrie, Jerry Jeff Walker, Guy Clark and Bob Weir. It was a labor of love, says Waits.

"We did one song with Guy Clark(2) - 'That Old Time Feeling' - that came off pretty good, I thought. Jack brings it with him when he comes, and that's rare these days.

"You could say Jack wears in his songs - they're well used and well sung," says Waits, adding with a characteristically raspy chuckle, "Some people would say he wears 'em in and wears 'em out, but he wears 'em, that's for sure.

"When he's learning a song he kind of tries it on like a pair of gloves. I got a chance to watch him do that when he recorded a song my wife and I wrote. He's got a way of doing things that's uniquely his own. He makes a song his own. That's the beauty of it."

Waits has been itching to record with Elliott ever since he first heard his music getting good play, in the days when he was working as a doorman at the Heritage Club in San Diego's Mission Beach(3).

"I was about 19, and his record was one of the most-played at this little coffee house. Jack's record was on the turntable all the time the one where he's on the cover with his horse and he's roping something(4).

"It had '912 Greens' on there, spoken out, the song that so moved me. It had his version of "Tennessee Stud' and some Woody Guthrie songs," says Waits. He paused, then added that Elliott "was a real hero of mine - the idea of meeting him one day and recording with him is pretty fantastic."

Waits, caught up in American music, did a lot of listening to Elliott, to Blind Lemon Jefferson, to Sonny Terry and Brownie McGhee, before stepping onstage at the Heritage Club to give the music a try himself.

"I think I made more as a doorman than I did playing," he said. "Eight dollars a night on the door, $6 a night on stage. A little strange."

Waits laughed at the memory of it, and the laughter was contagious. He called back easy-going roams with Elliott when both men were moving through Los Angeles in the high-water years of California folk.

"We bumped into each other a couple of times," said Waits, making it matter-of-fact. "Hung with him in clubs in L.A., him and his dogs and his motorhome."

After listening to the long-sleeve best of Elliott's stories, Waits is convinced "Jack should sit down somewhere with a tape recorder and talk all day and they should put it in the Library of Congress.

"He's got one of those stories that is a novel unto itself, and I'd like to read it," says Waits. "Because his story is also the story of the country."

(2) Guy Clark: American legendary singer/ songwriter known for his crafted folk- and blues -influenced country music. Further reading: Guy Clark official site
- Tom Waits (1976): "I like Martin Mull. I like his whole bit with the easy chairs, and I like his music. He's an ex-teacher. I have some of that in my family -- my father teaches Spanish at a high school. Bonnie Raitt, Jerry Jeff Walker, Guy Clark...all good songwriters." (Source: "Play It Again Tom" New Times magazine (USA), by Robert Ward. Date: Unicorn Club, Ithaca/ New York. Published: June 11, 1976 (Volume 6, number 12))
- Tom Waits (1999): "Well, I like Guy Clark a lot. I've known him for a long time. And I like Lucinda Williams. I like her a lot." (Source: "Mule Conversations" Austin Chronicle (USA), by Jody Denberg. Date: February 26, 1999: published April 23, 1999)
- Tom Waits (2000): "I love Los Lobos. Those guys out of Denver, 16 Horsepower. What about Sparklehorse? He's great. Lou Ann Barton, she's got a great voice ... [Captain] Beefheart, of course. Elvis Costello. He's a renaissance man, he's multidimensional. His song "Baby Plays Around" I thought would be a good song for Little Jimmy Scott, who is someone else I really admire a lot. Howlin' Wolf, of course. The 3M Corporation - Monk, Miles and Mingus. Roland Kirk is up there really high. Sun Ra, Cryin' Sam Collins, James Harman, Tina Turner, Aretha, Daniel Johnston. And I like anybody with "little" in their name. Little Jimmy Scott and, uh ... Little Charlie & The Nightcats ... all the Littles, and I like all the Bigs ... Big Mama Thornton, Big Joe Turner Big Bill Broonzy, Little Anthony & The Imperials, Little Richard ... Zappa, Nick Cave and, of course, The Rolling Stones, can't leave them out. Bill Hicks, Johnny Cash, Ramblin' Jack Elliott, Guy Clark, Randy Newman. And Harry Belafonte." (Source: "Tradition With a Twist" Blues Revue magazine No. 59 (USA). July/August, 2000 by Bret Kofford) 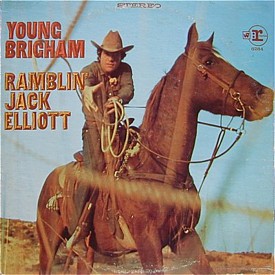