The Late Show With David Letterman

DL: Our next guest is truly one of the greats. He is a Grammy award winning singer songwriter, whose new CD, right here, will be in the stores October 5th. It's entitled Real Gone. Please welcome back to the Late Show(1) , Tom Waits! Tom, come on up!

(Waits comes up, shakes hands with Letterman, greets the audience and the band. Sits down)

DL: Nice to have you here Tom!
TW: Hey, thanks.
DL: Good to see you again, and as we asked John, "How are things with you? How is your family?"
TW: Oh, the family is good you know...
DL: How big is your family?
TW: Well, we have three kids and eh... You know, the other day, it's eh interesting you would ask that, because I overheard my older kids talking to my younger boy. And they were saying: "Don't ever! Don't ever... ask dad to help you with your homework!" (laughter)
DL: Wow! What's...
TW: It hurt!
DL: Yeah I can see that it would!
TW: It hurt me!
DL: What's it all about? What's...
TW: Well, you know I don't know, I eh... They said I made up a war once. (laughter) And eh I think I was just groping for the real name and I just substituted it for rhythm, you know?
DL: Just to keep the conversation going on... And eh, do you exaggerate stuff, or do you just lie. I mean is there a difference really?

TW: Well, there is really no difference. I was eh... it's interesting because... You have a boy right?
DL: Yes I do.
TW: So you know what "cribbing" is right?
DL:... well no... (laughter)
TW: Cribbing is... (to the audience). Ok folks, for those of you who have kids. When you have a crib and you have a child in the crib, you have eh... you have cribbing... And you have eh... they EAT the wood... around the edge of the crib.
DL: They actually are teething on the reel...
TW: But they are actually eating into the wood itself. In fact my boy ate straight through the wood... It just, it destroyed the resale value! (laughter)
DL: If it can't get you (...?...) out of a crib, then what's the deal!?

TW: Well here's the deal. Now, horses crib as well.
DL: I've heard that, yeah.
TW: Now they apparently, it releases some kind of a chemical in their brain and it gets them a little loaded. So they're aaalways cribbing. And I was, I was out at the track and I was going by a barn and there were several horses and I was looking at them as I walked by. And one just caught my eye because he'd been cribbing on a white piece of plywood that was the door to his stall. And he'd eaten away the wood and the picture that it created... I kid you not... it was a picture of a horse jumping over a fence! (laughter)
DL: Alright.
TW: And it had a lot of style, it looked like a Grecian urn.
DL: Yeah.
TW: Beautiful! Anyway...
DL: I thought you had a photograph, do you have a photograph of it?
TW: Do you wanna see the picture?
DL: Yes I DO wanna see the picture!
TW: Are you doubting me?
DL: NO I'm not doubting you! But I think it would just be eh..
TW: (takes picture out of his pocket) Okay, where do I put the picture?
DL: Well show it to me first! (laughter)
TW: Okay, (hands over picture and points) Now what's that a picture of?!
DL: My god, he's right....
TW: What is that a picture of?!
DL: Let me just show this, this is unbelievable (puts picture in front of camera) 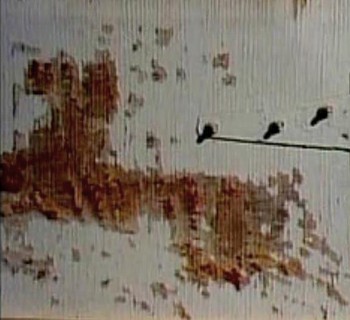 TW: Now what's that a picture of!? And notice... notice how he worked around that hinge. And just so you don't think that every horse is a genius (takes out more pictures from his pocket). You know, here's a guy who just ain't worked it yet (shows picture).
DL: Got nothing happening there.
TW: Nothing happening there. Here's another one (shows next picture), if you think they can all do it. (laughter). Look at this. Nothing!
DL: Tom! That's unbelievable Tom!
TW: Ain't that unbelievable?
DL: Stunning!
TW: Anyway, the horse in the next stall... had written a script!

DL: Oh no, cut that out! (laughter). Now when we come back, you're going to do something from the new CD. Is that correct?
TW: Yeah, we...
DL: Tom Waits, Real Gone. Excellent!
TW: Oh...
DL: We'll be right back ladies and gentlemen with Tom Waits!