I Hope More People Misunderstand Me

Inexplicably, that unwieldy synthesis has produced a pair of graceful and intoxicating albums, the simultaneously released Blood Money and Alice(1). Arriving respectively at No. 32 and No. 33 in Billboard, the discs delivered Waits' highest chart positions to date, each selling 32,000-plus the first week. The achievement underscores his cult's ferocious appetite for the twisted beauty, sonic alchemy and uncommon sense of Waits' music.

Alice, a shadowy and vivid rumination on insanity, was based on a play about Victorian writer Lewis Carroll's obsession with the girl who inspired Alice in Wonderland. It opened in Hamburg in 1992(2) and ran for 18 months, though Waits didn't record the songs until last summer.

Waits is expected to book bicoastal shows later this summer(4). Fans can catch his video for God's Away on Business at www.anti.com, where the first of four interview segments surfaces July 2.

Question: Did you have any reservations about releasing two albums simultaneously?

Answer: No. If it turns out to be a good idea, I'll take credit for it. If not, I'll blame it someone else. When you haven't had a record out for seven years, people get upset. When you put two out at the same time, they get upset. It's either "Why've you been away so long?" or "Why are you here all the time?"

Q: Alice was based on the notion that Lewis Carroll was obsessed with his literary creation. How did you approach it musically?

A: It's a hypothetical situation. I'm imagining a whole Victorian atmosphere and someone like himself, who had this obsession and compulsion. He was mystified by this peculiar, sparkling little girl. I'm trying to explore the nature of obsession, not just in his frame of mind but also as it applies to any love affair.

Q: In examining obsession, how much comes from your experience versus your imagination?

A: There are always hidden charges.

Q: On the tune No One Knows I'm Gone, you sing, "The rain makes such a lovely sound to those who are six feet underground." How could you know that?

A: OK, all right. I made that up. I really don't know what that means. I pictured her going down the rabbit hole, and I like to imagine what it's like down there. I'm sure it's different for everybody that's dead.

Q: You recorded Alice last summer, nearly a decade after the stage play. Why the delay?

A: I stuck it all in a box and stopped recording for a while. When I did start again, I wanted some really fresh material, so I did Mule Variations. Then I got back to Alice. You don't want songs to go bad on you, and you don't want to waste them. A good butcher uses every part of the cow. So I either use them or cut them up for bait to catch other songs.

Q: Blood Money is strikingly different in tone but also based on an old story. What drew you in?

A: It's a story that continues to surface in Europe. Wilson told me about this lowly soldier who submitted to medical experiments and went slowly mad from taking medications and herbs. He finds out his wife is unfaithful. He slits her throat and throws his knife in the lake, goes in after it and drowns, and then his child is raised by the village idiot. I said, "OK, I'm in. You had me at 'slit her throat.' "

Q: You also composed the music for The Black Rider(5), a German folk tale adapted by William Burroughs for Wilson in 1993. How difficult is it to turn your creations over to someone else's control?

A: You have to be willing to throw your stuff in the pot. A week before they open, most plays or operas are just drek, complete pandemonium. You want to shoot yourself and then quit, or quit and then shoot yourself. Somehow, miraculously, the night before it opens, everything starts to feel more like a clock or a ferris wheel. A certain calibration takes place, and it starts to tick. But you have to wait so long and look at all these ruins.

Q: In describing Blood Money, you said, "I like a beautiful song that tells you terrible things." Why are you drawn to the dichotomy of pretty melodies and harsh words?

A: I guess that's a Brecht/Weill approach: He who is happy has yet to hear the terrible news. It's interesting to try and put things in songs that will explode later. They're set for a certain time. You light the fuse. Oh, that's not really a good image these days. Let me rephrase that or I'll have somebody following me. How about, it's like making dinner. That's more American, more democratic.

Q: Since you brought it up, how did September 11 impact artists and music?

A: Artists are trying to figure out what they do that has value. A lot of things have to happen before you turn on your record player. You want to be safe and warm and held. At times I think, "What am I doing? Making jewelry for the ears?" The world's on fire and we're on a bus without a driver. We're all very much awake now. It's important for us to remain awake and not go back to sleepwalking in our pajamas, playing golf and contemplating our navels. The rest of the world is tapping us on the shoulder with the oldest conflict of time: the haves and have-nots. It's time for great men to step forward with wisdom and depth and compassion, and I don't know who they are. We all feel impotent politically. I don't know the answer. You have to start with self, family and community.

Q: Music can be frivolous, but some songs open windows into human nature and make people think. Isn't that a valuable contribution at a time like this?

A: Or are you just throwing peanuts at a gorilla? Songs are vessels of emotion captured in Jell-O molds. Has the role of music changed? It's so industrialized now. When was the last time you sat in a room and sang the same song with anybody? Everything is secular and compartmentalized, I guess so that we won't get together and talk among ourselves.

A: "Today you play jazz, tomorrow you will betray your country." That was a poster in Russia. The folks who know the truth aren't talking. The ones who don't have a clue, you can't shut them up. I don't know how any truth emerges. I hesitate to be too optimistic, but I try not to be so despondent that I'm paralyzed.

Q: You have a legendary love for exotic instruments, yet I'm still surprised you managed to incorporate something as unwieldy as a 1929 pneumatic calliope, which sounds merry and haunted at the same time.

A: It's ear-bleeding loud. It has all these pipes that look like radiator hoses. If you call the whistles "pipes," by the way, a calliope player will hang up on you. I loved it. You can scream when you're playing it and not be heard. I'd like to see more of it in popular music.

Q: And where does one find a boomerang seedpod?

A: On butang trees in Indonesia. The pods are four feet long and they twist like pasta when they dry. There are like 12 massive seeds inside, each bigger than a hockey puck. I love the sound of it, a big, mean, low rattling.

Q: What other instruments have you coveted?

A: In the original orchestra for Alice, we used a theremin player, Lydia, the granddaughter of Leon Theremin(6). You figure someone like that would have this rosewood, ebony and mother-of-pearl theremin. Hers looked like a hotplate with chipped house paint and a car aerial coming up out of the corner. It was hilarious.

Q: Did you ever invent your own instruments?

A: As a kid, I put the grass between my thumbs and tried to make it squeak. I loved the sound of cherry bombs. I like the clang and the boom and the steam.

Q: Do you tend to experience life more vividly through your ears than other senses?

A: When I can afford that luxury, yeah. I subvocalize. I make a lot of sounds that don't have any meaning, and slowly they form into words, and the words form into meaning. I start from inside, just kind of hollering out odd-shaped sounds as a musical ingredient. Songwriters don't go to school. They sit around and listen to the record player and go, "How did they do that?"

Q: But you also seek out natural and nonmusical sounds not common in recordings.

A: Only because those are the wild sounds. Songs are domesticated, complacent little creatures who will never get out in the wild again. I like my songs raw, with the pulp and seeds. Those are nutrients.

Q: So songs should adhere to a high-fiber diet?

A: It's not good to listen to too much highly processed music. It leads to heart attacks and apparently rheumatic fever.

Q: How hard is it to get the sound you hear in your head translated accurately to a recording?

A: As soon as the songs hear the crack of that rifle, they go running for cover. But I've usually got three days worth of food and a scope. You want to avoid recording the feathers and throwing away the bird, I guess. You do want something to be living in them. So you sneak up on them. Because the recording process involves putting something through a machine, you have to wonder what falls down into the filter. Sometimes we pull out that lint and make other songs.

Q: Would a stress-free life inhibit your creativity?

A: I thrive on pain and discomfort. I like misunderstandings. I think I have an auditory processing problem. I like when I hear a song from a radio far away and I mishear it. As it limps across, it gets interrupted by the tractor or an airplane or the wind.

Q: Do you fill in the blanks or revel in them?

A: I like the missing pieces. I don't like things too tidy. (Filmmaker) Terry Gilliam heard the line "in a Portuguese saloon"(7) (from The Part You Throw Away), and he thought I was saying, "On the porch, the geese salute." That's better! I hope more people misunderstand me.

(4) Waits is expected to book bicoastal shows later this summer: It seems originally shows were indeed planned for fall 2002. But in September it turned out the shows were not going to happen, because Waits was said to be working on his next album.

(6) Lydia, the granddaughter of Leon Theremin: "Being the granddaughter of Leon Theremin's first cousin, Lydia Kavina (1967) was the inventors last prot�g�e. At the age of 9 she started studying the instrument. She gave her first concert at the age of 14. She studied composition and graduated in 1992 and she finished post-graduate studies in 1997. Today Lydia is one of the few professional thereminists in the world and a master teacher on this instrument. She also is a composer and has premiered her own works and those of others throughout Russia, the USA, Europe and Asia." Further reading: Lydia Kavina Official Website. 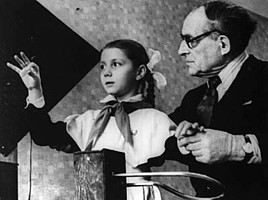 (7) Terry Gilliam heard the line "in a Portuguese saloon": Terry Gilliam: "I'm looking down at [lyrics I've written] here and I keep seeing things like, "On the porch, geese salute." Is that the way the lyrics go?" Tom Waits: "Oh no. That's even better. "In a Portuguese saloon." But I like that better. I'm going to write that down." [Terry repeats as Tom writes]. (Source: "Grimm's Reapers" Black Book magazine (USA) June, 2002 by Terry Gilliam. Date: April 10, 2002)