BG: Anyway, I said I'd be (..?..) friends above ratings any day, and that's just the way the Gimble guys were made. And that's true. But I have to tell you, it was close. And just to be sure that the marriage of Tony will not mean a divorce from our audience and bad ratings, we also booked a genuine celebrity on our show. Please welcome one of my best friends, I met him... well once now, and it's just wonderful. Please welcome, concert and recording star, mister Tom Waits!

(Waits reaches for some candy on the coffee table)

BG: Have some candy.
JH: We're all in black today eh?
BG: Yeah. There's Kisses (reaches for the candy)... This should be... What are they doing on top? What are these Kisses doing on top? I've told the girls time and time again: I like my Kisses on the bottom. (laughter)
JH: Maybe when the lights get hot, they're afraid they'd melt there.
BG: Anyway, Tom welcome. Nice to see you.
TW: Nice to be here (takes out a cigarette)
BG: Yeah we got matches here for our matchless friends down at the liquor store (reaches for matches on the table, and lights Waits' cigarette).You been away, well you visited (..?..) for a while. Now you've been out touring and that kind of thing. Does that get to be a real drag just...
TW: Oh well, I've been playing the big rooms now.
BG: You've been playing the big rooms?

BG: Any new albums coming out, that kind of thing?
TW: I have an album called "Music To Seduce A Divorced Waitress By", which will be out... (laughter)
BG: That should be popular with a lot of people I know, yeah. Any seasonal hits, or anything like that?
TW: Well, eh seasonal hits?
BG: You know a lot of people do special albums, do you have a Christmas album by any chance?
TW: As a matter of fact I am gonna be releasing a Tom Waits Christmas album, in the middle of August. Coming out then.
BG: Well look at that. The album will be in the stores. That's great. I've tried to find some of your records around and eh, I don't know. I thought it was interesting cause we were talking backstage about that plan your record company had for distributing them. Hiding them in various fields around the country (laughter). But didn't seem to really turn the tide. Listen we could talk like this all night...
TW: I imagine we could.
BG: ... except I just hate the prospect of job hunting. So we will be right back.
JH: I bet Tony's in a hurry too, IF you know what I mean!
BG: That's right! (laughter). Have you met the bride and groom back there? Or the bride to be and the groom to be?
TW: They look like Benson & Hedges back there! (laughter)
BG: We really don't have to know them. And I don't think you really want to. It's just your name we're after Tom. And Tom will be here for the next half hour, so don't anybody touch that old TV dial. Just because of Tony Roletti you might be missing something of Tom Waits! So okay, that should get things started. Let's meet the man of the hour! Why not. Or actually the half hour, or the half man of the half hour or whatever you wanna call it. It always seems like an hour when he sings you know, but that's Tony Roletti, that's right. Ladies and gentlemen, direct from the pump room at the Copacabana Inn, Mr Tony Roletti!

BG: Tony, this is Tom Waits. How are you doing. This is great! Come over and have a seat. We only have a few minutes, but why don't we talk a little bit. You know Tom?
TR: (in a Tom Waits voice) Hello how are you doing? (laughter)
BG: Two great singers on one couch! Wow! Incredible (laughter)
TR: Goodnight people!

JH: Ladies and gentlemen we take great pleasure in presenting on our stage, the Roletti-Sherwood wedding. With special guest Tom Waits. Let the ceremony begin!

BG: Please join us tomorrow night for the continuation of the Roletti-Sherwood wedding. The reception will be held right here on our stage. Meanwhile Tony and Joanie will be kept as pure as the driven snow for another 24 hours.
JH: There may be just a little polution in that snow, but we'll hear more about that tomorrow!

BG: ... everybody back here tonight for the reception, including special guest star Tom Waits. And as you know...

BG: We're back here at the wedding of Tony Roletti and now Joanie Roletti. And of course Happy Kyne and The Mirth Makers and the wonderful Rabbi "Shecky" Stein and of course our special guest Mr. Tom Waits. Tom what do you think of the wedding sofar?
TW: [with his mouth full] It's just fascinating..
BG: Well, listen. You've been traveling all over the United States.
TW: I'm doing quite a bit of traveling. [Judy Kahan dressed up like the bride enters]
JS: Excuse me, pardon me. You know, I kinda like to give you a chance to dance with the bride.
BG: You hear that! Ha, ha, ha! Isn't that amazing? She wants to dance with our special guest Mr. Tom Waits! You know the steps?
TW: [wiping off his hands] I think I can take care of business... [TW doesn't know where to put the food he was just eating]
BG: [offers to hold it] I won't touch it! [TW puts the food in his pocket, wipes his hands and grabs the bride. The two start dancing]
BG: [walking around the dancing pair] Well, what I was asking was.. You've been playing all over the country and eh.. Any place in particular really sticks in your mind?
TW: Well I've eh.. I worked a lot of joints. A little place outside Cincinnati was eh.. Well, originally it was nothing more than a men's room. They decided to knock out a room and build on.. you know eh.. Did two shows a night.
BG: Two shows a night?
TW: Aha, had an opening act. But I do a great deal of traveling nowadays. [to JS he's dancing with] You're a sweetheart. [she giggles nervously].
BG: [to the groom TR} You don't get jealous don't you?
TR: [eating, mouth full] Huh?
BG: [to the groom] You don't get jealous don't you?
TR: [still mouth full] Oh no!
BG: [to the camera] I have a feeling that we might have an ordinary struggle if we don't stop the music right now.

[Close-up BG ]
BG: I think there's no better way to really make a tribute to these people than through music. And fortunately we have a very special guest with us... Mr. Tom Waits! And when he plays and sings, it's almost like music. So.. again, thank you very much and goodnight.
TW: [TW at the piano, talking while smoking] The couples... I get a little choked up on occasions like this. Actually the closest I have ever been to a marriage is.. I was the best man at a friend of mine's divorce. [plays "Better off without a wife ". In between are shots of the couple getting undressed. Constant laughter from the audience].

In July 1977 a satire of talk shows "Fernwood2Night" was developed by Norman Lear to fill the summer gap between "Mary Hartman, Mary Hartman" and "Forever Fernwood". Set at the studios of Channel 2 in fictional Fernwood/ Ohio. It starred Martin Mull as host Barth Gimble and Fred Willard as his half-witted sidekick Jerry Hubard. Most of the guests on "Fernwood2Night" were purely fictional, but a few celebrities, such as Mr. Waits, played "themselves". "America2Night" was introduced in the spring of 1978 and was similar in format to its predecessor. Mr. Waits appeared on both shows:

Questions and responses were definitely scripted ahead of time. Everything is carefully planned, so this TV appearance shouldn't be regarded as a regular interview. Some of his answers might even have been written by the America2Night writers team. In this sequel Mr. Waits is treated like some freak. He's playing the role of the seamy grizzled streetwise raconteur, only doing this show to get some money and food. The hosts are constantly "making fun" of him. There's constant laughter from the audience.

Martin Mull and Mr. Waits were close friends with a compatible sense of humor. Both were musicians doing little comedic bits in between songs. Mr. Waits appeared on the 1977 Martin Mull album: "I'm everyone I've ever loved "(ABC/MCA AB-997). Mull's first break in television was on "Mary Hartman, Mary Hartman," which he describes as the "Roseanne of the 70s." Since then he has also done over two dozen feature films. Mull was a teaching fellow and has a Master's degree in art and has since stayed in touch with the medium both through painting or drawing. Check out this site for some artwork by Mull. For more information on Martin Mull, please check out this excellent: Unofficial Martin Mull Homepage 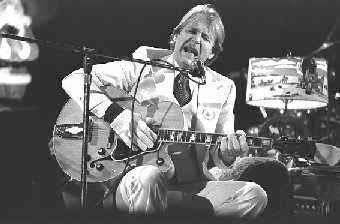